I’ve always loved making images. Most of them start as pencil drawings on paper but usually end up digital at some point. Some of them start digitally in a camera and often I combine both approaches.

Posted by stylefrog on March 17, 2015 in Digital Canvases 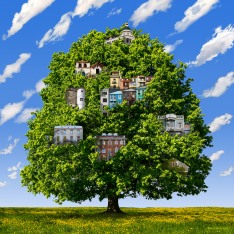 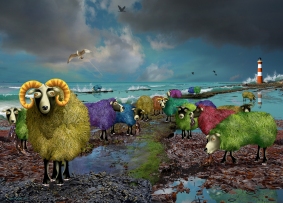 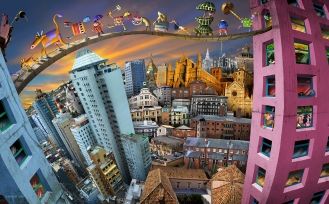 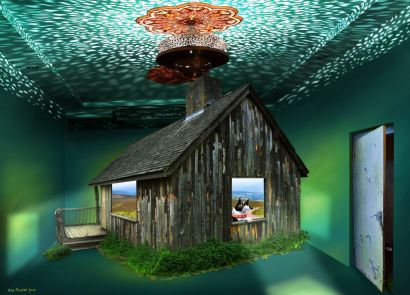 In 2015 I was asked to create a series of relatively large canvases for a hotel/music venue in Gloucestershire. I decided to create images using collage techniques that related to my cut-out animation work. I wanted to combine my drawing with photography. This was something that I had done previously using paper and scissors, but by working digitally I could more effectively combine all of the elements. Being used to relatively small TV screens and book formats, I’d never worked digitally on this scale before. For this first commission, I made 9 canvases in total. It provided the template for most of my work from then on.

I was given free rein on the subject matter but obviously wanted the canvases to reflect their setting. I followed a loose ‘music’ theme creating images that told elusive stories. While the backgrounds were often largely photo-collage, the characters tended to be drawn and stylised in line with my children’s illustrations. I wanted to retain some of my usual humour and playfulness but added some darker, more adult ingredients.

I found that the pictures took on a life of their own. Each obscure story seemed to link to the others; sometimes unintentionally. So when the first commission had finished I continued adding narrative canvases, creating an almost parallel world.

All works © Alan Rogers 2015-18. Please do not reproduce without the expressed written consent of Alan Rogers.